Bucharest, May 7th, 2020 – Vodafone Romania Foundation is launching Bright Sky Ro app, a free digital tool that supports victims of domestic abuse, providing assistance and useful information to people in an abusive relationship or to those who want to help such cases. The app was originally developed by the Vodafone Foundation Group and subsequently adjusted for Romania in partnership with the Romanian Police, “Necuvinte” Association and “Code for Romania” Association. Bright Sky Ro is available in App Store and Google Play Store in Romanian, English and Hungarian. 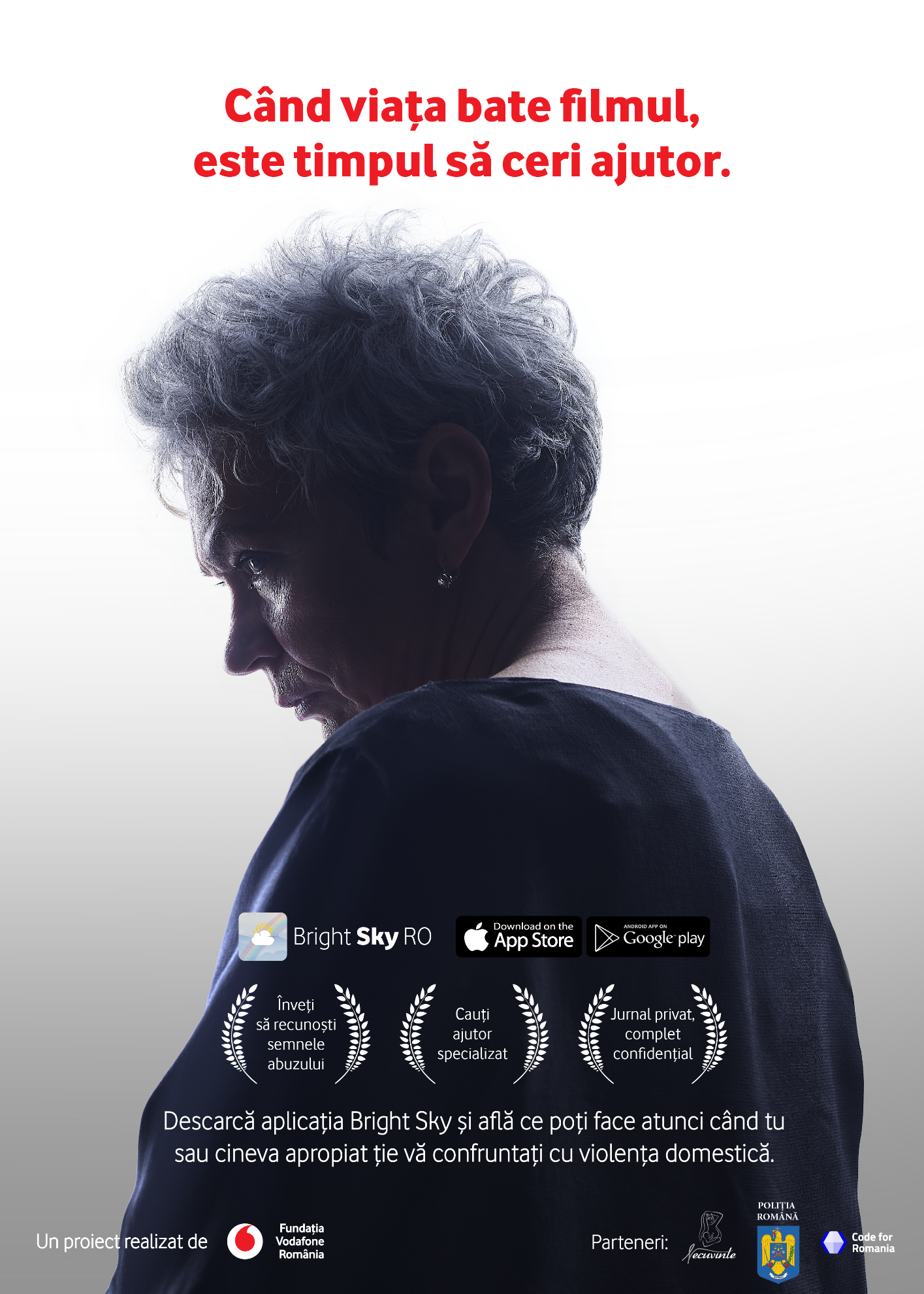 Bright Sky Ro has, essentially, an informational and educational role, as it describes the categories of gender-based violence, dispels the myths related to this phenomenon and allows the user to assess the security of a relationship by simply filling out an electronic form. The application also provides a database of support services, so that the user can contact the nearest available service in their area. In addition to this, the app’s menu allows users’ access to information about the causes and consequences of abuse, the safety plan and the legal provisions that can protect a victim of domestic abuse (the provisional protection order given by the police and the protection order given by the court), as well as the measures that can be taken to improve online safety.

Bright Sky Ro offers the possibility to record incidents in a confidential digital diary, at an email address that is chosen by the victim, through a function that uses text, audio, video and photo content. The information gathered by the victim in this diary can serve as evidence in court. The app provides useful information and advice related to consent in sexual relationships and harassment, as well as case studies that present examples of different abusive behaviors most frequently found in intimate relationships.

The need for such a project is grounded in the fact that over 80% of Romanians consider violence against women as a widespread national phenomenon. During 2019 alone, nationally, the police issued 7,986 provisional protection orders, of which 2,958 were turned into protection orders*. Also last year, the courts issued 7,899 protection orders, most of them at victims’ request.

After the initial launch in the UK in 2018, Vodafone Foundation Group took the initiative to introduce the Bright Sky app in all countries with Vodafone subsidiaries. Currently, Romania is the fourth country where this app is available, after UK, Ireland and the Czech Republic. Vodafone Romania Foundation has worked with local partners to develop and adjust the content of the app, so that it relates to the local reality and legislation.

The Romanian Police (through the Research and Crime Prevention Institute) provided institutional support on legal provisions in the field of gender violence, victim protection tools, recognition and prevention mechanisms, contributing with information and statistical data to understand the phenomenon at national level. The Romanian Research and Crime Prevention Institute functions as a subpart within the General Inspectorate of the Romanian Police, and coordinates, monitors and controls the entire crime prevention activity carried out by the Romanian Police, at central and territorial level.

More information about the Institute is available at:

Necuvinte Association, a non-governmental organization specialized in preventing and combating gender violence in Romania, provided advice from the perspective of the civil society that interacts with both victims and parties involved in supporting them (governmental institutions, psychological counselling agencies, shelters). The Association was instrumental, among other things, in developing the questionnaires assessing the security of a relationship and dispelling myths related to forms of domestic and / or sexual abuse. Also, Necuvinte Association facilitated the project’s partnership with the main institutions with responsibilities in the field of preventing and combating domestic abuse in Romania.

Code for Romania Association compiled the database with nationally available support agencies for victims of gender-based violence and contributed to the list of measures that can be taken to improve online safety. Code for Romania is a non-governmental organization, established in 2016 with the purpose of solving problems in the Romanian society by means of technology. In over three years of activity, Code for Romania brought together a community of over a thousand IT, research and UX volunteers, from the country and the diaspora, and delivered dozens of viable digital solutions in collaboration with both civil society and public institutions in Romania. All Code of Romania’s solutions are open source under MPL 2.0 licence, which means that any Code for Romania result can be reused and / or replicated.

The Vodafone Romania Foundation is a Romanian nongovernmental charitable organisation, established in 1998, which operates separately and independently from the company’s business. Over more than 20 years of activity, the Vodafone Romania Foundation has funded 1,168 programs run by 745 NGOs throughout the country, in the fields of healthcare, education and social services. These projects had more than 3 million beneficiaries – children, young and old people, physically, socially or economically disadvantaged people. So far, the Vodafone Romania Foundation has invested 31 million euros in projects run by non-profit partner organisations. More details about the Foundation’s programs are available at www.fundatia-vodafone.ro, http://jurnaldebine.fundatiavodafone.ro/ și www.facebook.com/fundatiavodafone.