Two of the most experienced lawyers in their practice areas, with a consistent track record, recognised locally and internationally and senior members of the RTPR team, Roxana Ionescu – specialised in Competition and M&A and Cosmin Tilea – specialised in Banking & Finance, were appointed Partners at RTPR. Thus, they join the team of 7 Partners consisting of Costin Tărăcilă, Victor Pădurari, Alexandru Retevoescu, Mihai Ristici, Valentin Berea, Alina Stăvaru and Raluca Năstase and will contribute to the accelerated development of the law firm. 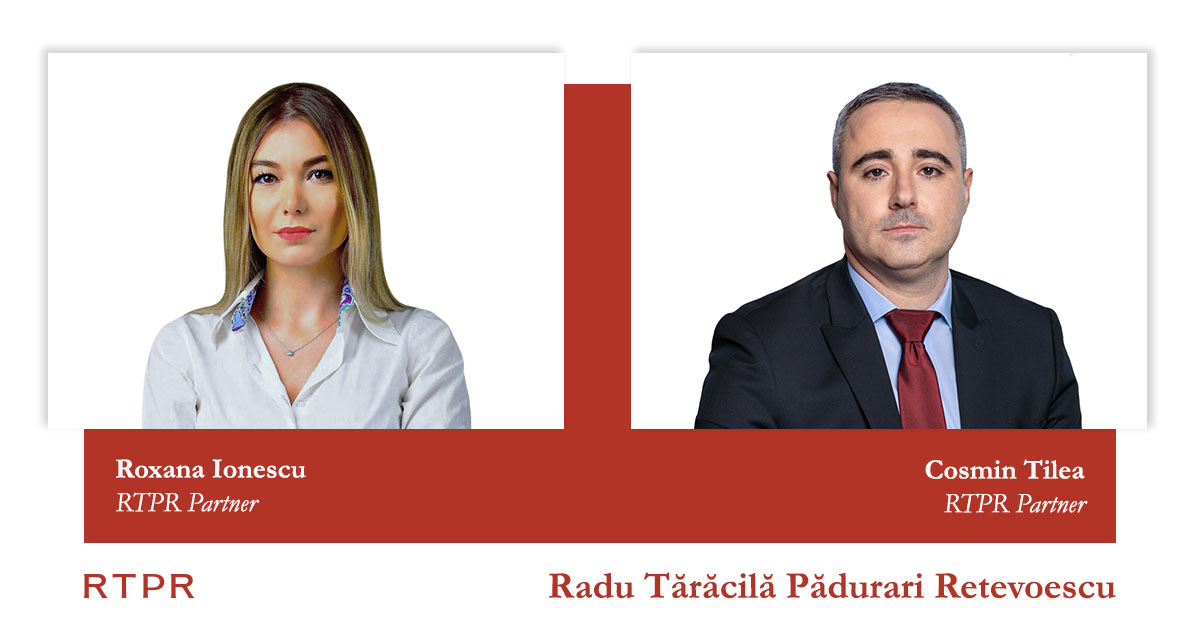 “Proficiency, involvement, amplitude, attitude and last but not least loyalty deserve to be rewarded. Both Roxana and Cosmin started their careers at RTPR almost 15 and 17 years ago, respectively, and sailed through all professional levels. The scale and complexity of the projects they coordinated, their determination and commitment convinced us to propose this well-deserved promotion. In the industry it is known that in RTPR the appointments of Partners are rather rare, as they are carefully considered and fully deserved. On the other hand, it is the second round of internal promotions of Partners in the last 3 years, which proves that the level of our senior team is very high. We are grateful to Roxana and Cosmin for everything we have accomplished together so far, along with all the other colleagues, and we trust that we will continue to obtain even more remarkable achievements to the benefit of our clients”, stated Costin Tărăcilă, Managing Partner RTPR.

Roxana Ionescu joined the RTPR team in 2007. She is one of the most experienced lawyers specialised in competition law in Romania, assisting local and international companies in antitrust investigations, merger control proceedings, competition compliance matters, as well as in mergers and acquisitions.

“I am proud to be appointed as a Partner in the firm in which I grew up, it is a recognition of the efforts and the work done in the last almost 15 years and a proof that merits and involvement are rewarded in RTPR. I would like to thank the Partners for their trust and unconditional support, the clients for their appreciation, as well as my exceptional colleagues – current and former – for their professionalism and dedication. There are no individual achievements in business law, it is a team effort that pays off only if everyone respects their commitments at the highest level. As for RTPR, this is obvious considering the firm’s and its lawyers’ positioning in the most prestigious rankings in the industry. In the future I will continue to build in my areas of expertise Competition and M&A, having a mix of skills that has proven to be successful, Consumer Protection, as well as associated practice areas”, declared Roxana Ionescu, the new RTPR Partner.

Roxana has assisted many clients in investigations of the competition authority, such as MOL Romania, Aegon Societate de Administrare a unui Fond de Pensii Administrat Privat, Tymbark Maspex, Panasonic, being recently involved in several investigations in the energy market (no less than 3 investigations), insurance and leasing. Roxana also assists clients in complex merger control projects, her mix of competition and M&A skills offering her a thorough understanding of projects.

The largest M&A projects in which she has been involved or coordinated include: the sale of the Profi supermarket chain to Enterprise Investors (2009) and later to Mid Europa Partners (2016 – one of the largest transactions in Romania in recent years); the sale of Regina Maria to Advent (2010) and later to Mid Europa Partners (2015); Meridiam SAS entering Netcity Telecom’s shareholding (2021).

Cosmin Tilea joined RTPR in 2005 and has very rich experience in cross-border financing and mandates involving securities, municipal loans, public debt, public procurement, real estate and energy transactions. For almost 17 years, he has provided legal advice in over 150 financing projects to banks and international financial institutions, as well as to entrepreneurs and developers on complex real estate financing and acquisition finance, structured finance, as well as on various real estate matters. He is also very experienced in project finance, assisting several international financial institutions and banks in financing the largest renewable projects in Romania.

“This promotion honours me and proves that merits and skills are recognised and rewarded at RTPR. I have been spending my entire career as a lawyer in RTPR and, even since I graduated from university, I felt this team was like a “second home” for me and the ideal place to acquire the most advanced and complex skills in the field of financing transactions. Through this promotion, I want to continue to develop and diversify the banking and finance practice together with the other Partners and to provide assistance to the highest standards to our clients, both banks, financial institutions and investment funds, as well as entrepreneurs. I am very grateful to all my colleagues for their full support in the transactions we have worked together so far, and especially to the Partners for the trust they showed me over the years, as well as with this promotion”, said Cosmin Tilea, the new RTPR partner.

Some of the most complex projects he has coordinated in recent years include the financing of the acquisition by Macquarie Infrastructure and Real Assets (MIRA) of the Romanian assets of the CEZ Group; the USD 360,000,000 financing granted by a syndicate of Romanian banks to several companies from the Rompetrol Group; several financings extended by EBRD, IFC and BSTDB to several companies in the EDP Group for the development of photovoltaic and wind farms with an installed capacity of over 400MW; the financing granted by Raiffeisen Bank International and Raiffeisen Bank for the development of several logistics parks by one of the largest owners of logistics facilities in Europe.

Both lawyers are recognised by the most renowned international legal guides, Chambers, Legal 500 and IFLR1000.

Roxana Ionescu was awarded Rising Star for Romania at the Rising Star Awards EMEA 2021 and 2020, offered by Euromoney Legal Media Group, for the category Competition /Antitrust, Next Generation Partner (Legal 500 2021, EU and Competition), Notable practitioner (IFLR1000 2021-22), and she is also included in the Chambers ranking.

RTPR is one of the most experienced and highly regarded law firms in Romania, recognised as such by the Legal 500, Chambers and IFLR1000, which every year rank the firm in top positions in their rankings for various practice areas, such as Banking & finance, Corporate/M&A, Capital Markets, Dispute resolution, Competition, Energy and natural resources, Real estate and Construction, Employment and Intellectual Property.