Improvisation theatre is a form of art that started in USA, Australia and Canada 60 years ago. Since then, all around the world the phenomenon has spread and new groups, theatres and formats appeared. In Europe each year a major city hosts at least one improvisational theatre festival, and some of the biggest festivals take place in: Amsterdam, London, Barcelona, Warsaw, Oslo. In Romania improv was brought by the director Vlad Massaci15 years ago and since then it has diversified and become a quality cultural product in the last six years ever since the first edition of !MPRO –The National Festival of Improvisational Theatre. Theatre-sports competitions, shows with specific genre, two actors shows, musicals and sketch comedy plays are only a few of the forms in which improvisation happens in Romania. 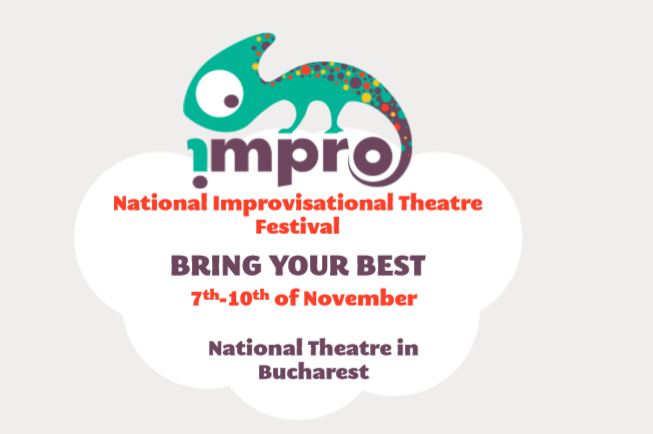 Why we do what we do? The festival has three main directions:
Audience development: bringing on stage the best groups and improvised theatre plays, short form shows, musicals and sketch comedy projects in Romania. Each year an artistic jury selects out of 50-60 applications the 16 shows that will be featured on the stage of the National Theatre;
Encourage cohesion and community development: the festival has been a multicultural initiative since the first edition, bringing each year international guests, the best improvisers and theatre groups from USA, Canada, Europe and Australia. More than 30 international actors, some of the best improvisers from Second City Chicago, The Annoyance Chicago, Paper street Theatre in Canada, Hoopla and The Nursery London, performed on the stage of the National Theatre in Bucharest.
Community outreach initiatives: along with the best shows selected from the best groups in Romania, each year a team of actors gets involved in training a group of debutants from different communities who then get a chance to play in one of the opening shows in the festival. In 2019 we work with high school students from three schools in Bucharest who will be trained for 8 weeks and then perform their first show in November at the Festival.