The world’s widest-reaching digital celebration of LGBTIQ+ themed film is now available online for free until 29 March 2020. Watch it at http://bit.ly/FiveFilms20

Five Films For Freedom is a global, online short film programme in support of LGBTIQ+ rights brought to you by the British Council and BFI Flare.

People across the world can watch the five films online in solidarity with LGBTIQ+ communities in places where freedom and equal rights are limited, and spread the word using the hashtag #FiveFilmsForFreedom. 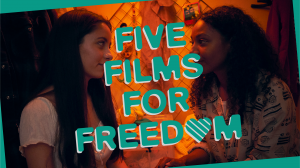 The film selection can also be a valuable resource for companies looking to encourage constructive debate around diversity and inclusion and help support their company culture in times of crisis, with interesting, entertaining and thought-provoking content.

This year’s short films come from the UK, Ireland, Brazil and Norway, and look at an intersection of LGBTIQ+ perspectives to explore love and acceptance, from self-expression, rural homophobia, coming out or finding love later in life.

Since the project began, 14 million people have viewed the films in over 200 countries and principalities, including in all parts of the world where homosexuality is punishable by the death penalty. Find out more about the programme and watch the films at http://bit.ly/FiveFilms20